Following on from last week’s feather dress, I quickly decided that the 1609 hadn’t beaten me yet. I cut out another using more fabric from a market stall. I’d liked the colour combination and wanted to see how it would look made up as a dress.

After cutting, I didn’t sit back down at the sewing table until Friday evening. I had transfered all the pattern markings so was good to go, but decided to start with the contrast collar. I’d ordered a metre of a Kona white as I had nothing remotely suitable in my stash. Once the seams were trimmed the collar pressed quite nicely, and with a final bit of hand sewing was ready to attach.  My first ever collar!

I hadn’t planned on sewing late but as the rain poured down I settled to carrying on for a while longer. This time I had added extra inches from the waist down, using a very scientific method of what looked about right. I wanted to improve the internal finish after my last make, which meant French seams. I was careful not to make my seams too wide, so as not to negate the extra fabric I had added. 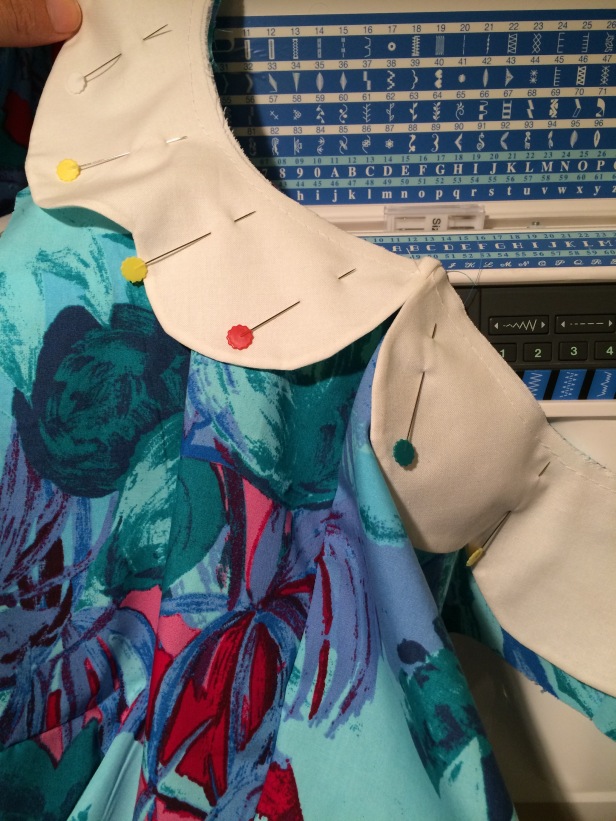 Towards the end of the make, I tried the dress on and decided adding the invisible zip at the back would do more harm than good in terms of fabric availability, so I ommitted it and French seamed that up too!

The insides are much neater but I do have to wriggle my way in and out of this dress – always good to have points to improve upon next time.  I’ve also discovered makeup should be applied AFTER putting the dress on, particularly with the white collar.

Once the make was completed and I looked closely at the pattern, I decided amongst the abstract print was what looked like a pear. It was then pointed out to me by a friend that it looked more like an avocado pear, to be specific, which I quite like the idea of.

The extra fabric definitely helped with the fit but I think a little extra on the bodice would have helped add some ease to combat the French seams. Once it’s on, I’m happy with the fit and love the collar and the colours. I wore it to attend my very first sewing class which I will blog soon. For now, 1609 version  3 is already cut out and on the sewing table…