Usually this is first and foremost a sewing blog, interspersed with a sprinkling of teaching. If you’re hoping to read about fabric, patterns and fumbling my way through new techniques, turn back now, as the path of this post is quite different.

In one or two previous posts, and if you happen to follow me on Twitter or Instagram, you may be aware that I’ve recently embarked on a new hobby – running. Just over 6 months ago I went for my first run. I got a Fitbit for my birthday in January, and I was curious about the possibility of trying to lower my resting heart rate. I’d never really thought about my heart rate before – but as my resting heart rate was averaging 77-78bpm  I couldn’t help but feel that it was a bit higher than it should be.

I’ve toyed with the idea of running once or twice before, but never with any determination or expectation that I would get anywhere, so to speak. I’ve always walked the dogs, and am proud to have completed the Lyke Wake Walk twice, but I’ve never been particularly fit or sporty. Back in mid April, I laced up my trainers and went outside. I used an app I had seen people use on Twitter – Runkeeper, just the free version. In 35m 3s I ran 3.19 miles. It was hard but I knew that to be able to do 5k in 30 minutes was respectable, and I wasn’t a million miles away. It was a start. I went every couple of days for almost two weeks, then tried a 10k. 6.4miles in 1 hour 14. It was hard but I was amazed I could run for so long without stopping or walking. A couple of days later I shaved that down to 1 hour 8 mins. I treated myself to new trainers, and had my gait checked and running style analysed.

It would be unfair not to mention the rough that came with the smooth. The old analogy of too much too soon definitely came into play, and a couple of months into running – even with shiny new trainers – I began getting soreness in my lower shins. In the night I would be awake after running because they were aching so much. To cut a very long story short, after two trips to a chiropractor and then one to a podiatrist, I finally scaled back my running to enable my legs to catch up with my fitness, which had just about been enough to carry me through those early 10k runs that I wasn’t really ready for. I switched off the announcements in Runkeeper that tell you time and pace and did what I was advised: ran for 30 minutes threes times a week for two weeks. I was running for an amount of time, not a distance and not with pace in mind, which grated on me but I stuck with. Over the next few weeks I upped my time by five minutes each week and then did three runs of that amount of time, and I could very quickly see the difference. I also focussed on my technique and posture, which I hadn’t at all before – who knew you have to learn to run?

Although I was aware that Parkruns existed, they were something I had never considered as of interest to me, but for 5 or 6 consecutive Saturdays in the run up to the summer holidays I woke up early and headed to Clumber Park; my nearest run. I took part in a 10k race two months to the day after my very first run, which took me around 1 hour 5 minutes and was in no way easy. In July I rashly decided that I wanted to do a 5k race in Rotherham that I’d found out about the day before, and got there and registered with literally moments to spare. When the klaxon sounded I realised this was possibly a mistake. It was one of the hottest days of the year and to say the course was undulating was an understatement. Furthermore, almost all of the other entrants were wearing their running club vests: this was a serious race. Yikes. I resolved that as long as I wasn’t last, I’d be happy. I managed to be about 72nd out of 80 – although I was actually thrilled with my time of 29m 30s! On a school night, with no notice or time to psyche myself up, in scorching weather. I was happy.

At the end of July I took the plunge and signed up for the Halloween Half, the local half marathon that takes place in Worksop. More by accident than design, it worked out that that gave me twelve weeks to train, so I installed another free app designed to help you prepare for a half marathon. I opted to run three times a week, as I thought this would be more practical when term began in September. The app was structured around three types of run, each week there was a long run, an interval or pace run and an easy run. No prizes for guessing which was my favourite. The app built up to a maximum time of 1 hour 50 minutes, and then for the last three weeks tapered down in preparation for race day.

Through the summer I continued running. I bought more trainers that were actually suitable to me and my feet and legs (advised by the podiatrist). I went on holiday and loved running in the beautiful Scottish countryside. In September I went on a residential trip to France, and my trainers came too and I followed my training plan and ran on Tuesday and Thursday evening. I surprised myself by how closely I followed the app, each day checking off whether I had completed the run or the rest day. In the full twelve weeks I missed one run – two days before the race my leg was stiff and had worsened during my previous two runs. I knew I would be a fool not to rest it for the sake of an easy 30 minutes, and risk putting my race in jeopardy. I sometimes switched days around, for instance completing my long run on a Saturday rather than Sunday, but I completed all but one of the 36 prescribed runs.

At this point, if not before, you may be wondering why. Why start is one question, but why keep going is quite different. My resting heart rate is lower – 63bpm at the time of publishing this. Also, I believe having an app like Runkeeper is hugely motivational, because the ability to track time and distance enables small gains that may not be felt, to be tracked. With almost every run I have seen an improvement on one level or another. In addition, running is something that is just for me. I’m in complete control, which I find appealing. If I have a bad run, it’s my fault, but if it’s good/faster/easier it’s because of me. I felt fitter and lost some weight, never a bad thing. I began to feel muscles I had never felt before. I felt a sense of accomplishment after each and every run. During training the furthest I ran was 11 miles, in slightly over 1 hour 50 minutes. 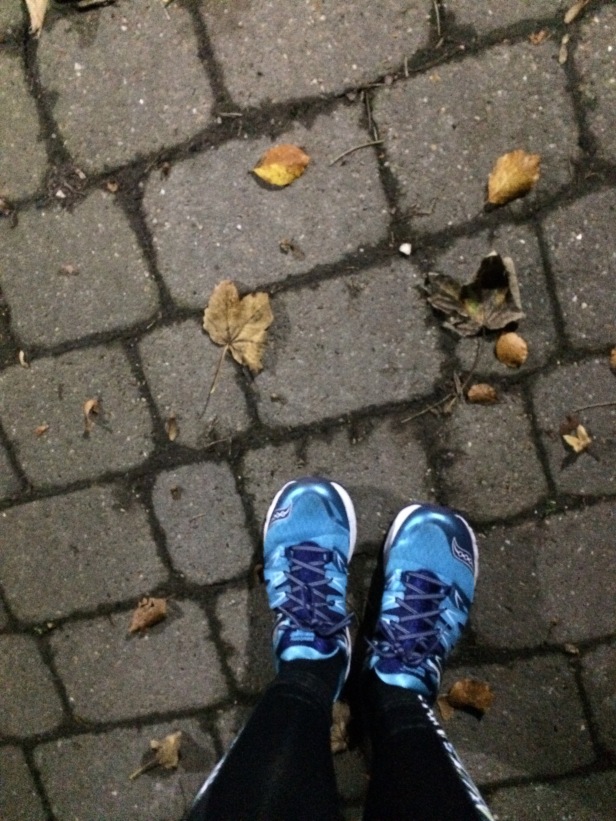 As I neared race day I decided it would be fantastic if I could use my first half marathon as a way of raising money for charity, and it would have to be Barnardo’s – the charity my class are supporting this year. I set up a Just Giving page and shared the link on Twitter. Donations began to come through from staff and families from school. I was humbled by how generous people were, perhaps never more so than when a donation for over £100 came through. The message stated that the Mallard pub at the train station in Worksop, had seen my tweet and chosen to donate the proceeds of their charity ale to my page. Completely unexpected. The downside of so much generosity was the element of pressure. If I messed up, if I didn’t make it or if my leg really was injured, I wasn’t just letting myself down any more. Although Barnardo’s would still receive the donations I didn’t want to disappoint so many people.

Race day dawned and at 6.30am, following much research, I ate two crumpets – one with cream cheese and the other with peanut butter. At 9am I headed across town, by car. After parking, collecting race numbers and dropping off bags, there was just time for a quick trip to the portaloos before heading to the start. I had run the vast majority of the course in different sections during training runs, so there weren’t too many surprises. Running as one of 2400 people is quite different though, and I guess looking at the different costumes and listening to conversations that were somehow going on, especially during those first few miles, definitely helped to distract me. I’d been advised to take an energy gel at miles 4, 8 and 12, and I knew they should be taken with water so they don’t upset your stomach. I made sure I paused at each of the three drinks stops, and also treated myself to a sponge to refresh my hands.

From mile 9 the tiredness set into my legs. Even though I had run further than that previously, I knew I was tiring and there was still four miles to go. I could have stopped, or slowed to a walk, but I knew I would see that as either cheating or failure. I kept going. Miles 9-12 were the miles I just gritted my teeth and ran through. They probably felt longer than the preceding 8 miles, and were definitely harder even though the start was hillier. I spotted a familiar face marshalling just before the mile 12 marker and that helped. A big smile from her and a glimpse of her chocolate labrador spurred me on.

With one mile to go and a steady decent I knew all that I needed to do was keep going. I was going to make it. That last mile felt long and I had nothing left to help me accelerate towards the finish. I just kept going. I spotted a friendly face from school and just after that they announced my name right before I crossed the finish line, and then suddenly there were volunteers perched on stools, ready to remove the timing chip from my trainer. I had made it. There was no one there awaiting me, no one to collapse into or high five, and no one there had any energy left to be concerned with anyone but themselves. But I knew people were waiting. I sent a couple of texts and then tweeted my photo – looking worse for wear but done. DONE! And in a respectable time – my chip time turned out to be 2 hours 51 seconds, a fair bit quicker than I had anticipated.

If you’ve got this far through this (half) marathon of a blog post, well done and thank you. There have been so many aspects to this race that have surprised me and surpassed my expectations. The total of my Just Giving page continues to astound me – as do the numerous messages of support that I have received over the past days. The page is still open, so if you’ve not had chance to donate I’d be thrilled if you did so. Each donation was the reason I kept going. Hearing people ask me how I got on in the half marathon is surreal. Me? A half marathon? In the same sentence? It still sounds odd, like they are enquiring about someone else. I’ve tried on my t-shirt, and I took my medal into school to show my class. Oh, and I’m now on the lookout for more half marathons. I mean, it would be nice to aim for under 2 hours, wouldn’t it?