Just over a week ago, I came across a tweet from Mollie Makes linking to this tutorial. Somewhat rashly, I hopped straight over to eBay and ordered the necessary supplies. All but the lime coloured ribbon arrived.

I started off by printing out the mistletoe template, and cutting the 9 sprigs from a square of felt.

I then cut out the circles of white to make the berries, but had to return to these later as I’d cut them almost double the requisite size.

I  stitched veins along the leaves then machine stitched on the newly decreased berries. 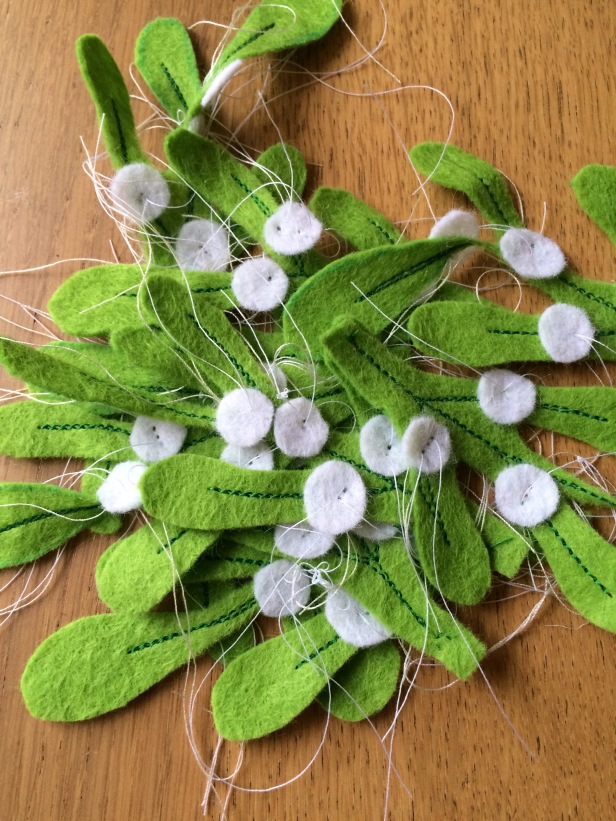 Several berries had barely caught from the few back stitches I’d used, so I then had to reattach some of them with a few more stitches.

The sprigs were then sewn into threes groups of three.

The only thing that put me off this tutorial was the prospect of cutting out 150 8cm circles, but I grabbed my trusty black Frixion, and a stiff piece of card, and decided tackling them as three groups of fifty seemed less arduous. 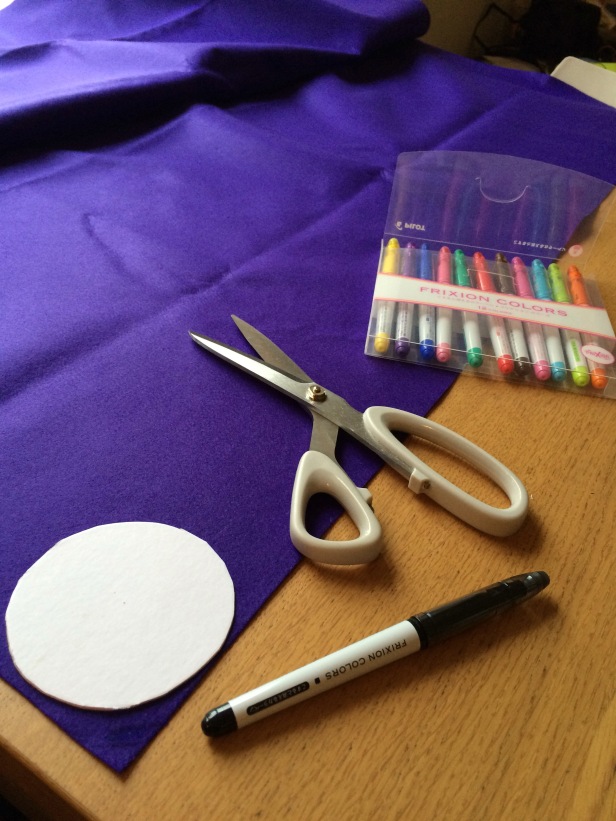 I’d ordered one wide metre of purple felt which was plenty for this project.

Cutting out multiple circles turned out to be the perfect thing to accompany binge-watching box sets on Prime, which I’m considering writing a dedicated post about soon. Fairly quickly and very easily, I soon had my three towers of circles.

The only real mishap with this make was that, whilst I had ordered a new box of pins specifically for this project, the seller had clearly got mixed up and sent me a cheap waxed tape measure instead. At this time of year, and for an amount barely exceeding £1, it didn’t feel like the best use of my time to pursue a replacement or refund, and luckily instead I was able to use a box of unused Merchant and Mills pins I received last Christmas .

Each circle had to be folded in half, then half again, to a quarter, then a pin placed through the point. I think this could be done as a two step process, but I went ahead and then pinned each one into the polystyrene ring. At first it was tricky to know how tightly to pin the circles, as I knew each pile of fifty would need to cover a third of the ring. 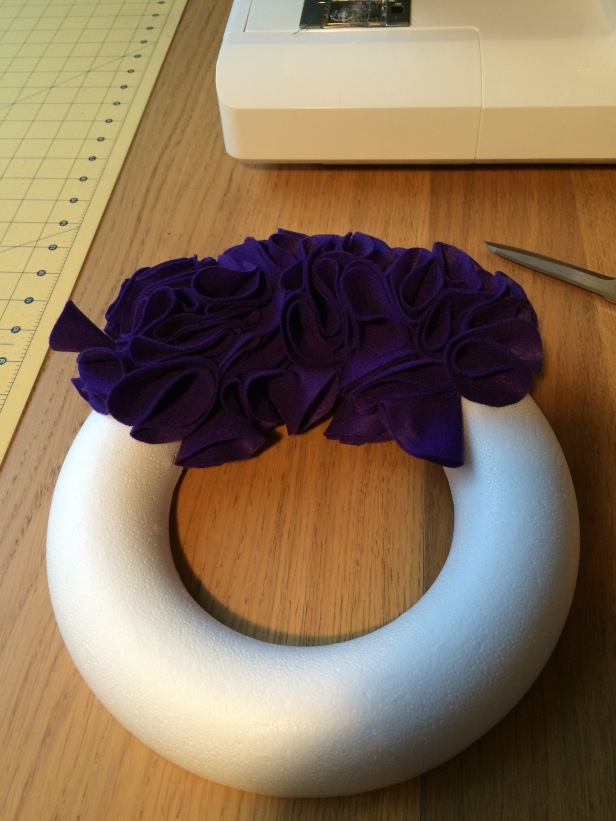 As I worked my way around from the first third, I knew I needed to space out the circles more otherwise I would need to cut more, but I didn’t want the white of the ring showing through either. I kept pinning and turning the ring to try and make the circles face different directions, as recommended by the tutorial.

When it was covered and looked fairly even, I pinned on the mistletoe, plus pinned on a little loop of regular parcel ribbon at the back. I may replace this with the satin ribbon when it arrives.  There is also supposed to be a fancy bow made of satin ribbon beside the mistletoe, but I’m not sure it needs it.

I think this garland will stay indoors, for this year at least. It was a very enjoyable, simple and satisfying project, and I’m hoping it lasts for a while. In total, the supplies cost me around £16, which I don’t think is excessive for something I had fun making and will keep. I wouldn’t have chosen purple as a Christmassy colour but I actually really like it with the green of the mistletoe.

Have you tried making anything like this before, and if so, did you follow the tutorial to the letter or did you add your own twist?