I can’t remember the moment I decided I wanted to run a marathon, but I do remember that I had by the time of the Worksop summer league home race. In May 2017 I entered the ballot for VLM 2018, but as I was aware that places are in great demand, booking the Greater Manchester Asics Marathon was my failsafe. In August I entered my details into an Asics training plan app and made a start on training. I knew it was early but as I had never run anything like marathon distance before I knew preparing properly would be crucial. Come October, I wasn’t successful in the general ballot for VLM and whilst I had been completely overwhelmed by the support I had received in raising over £500 for Barnardo’s the previous year, I had no interest in going for a charity place for my first marathon. I was content to set my sights on Manchester.

The first stage of the plan involved running much slower than I normally would, but as I have read a little about heart rate training I knew this was to be expected. I had said I wanted to run four times each week, so three rest days.

During the past six months almost every Wednesday I have got up around 5.30am to head out to do five or six miles with my training partner Charlotte, her dog Bess and my dog Wilf. I’m not going to lie, each Tuesday night I would set my alarm and go to bed dreading the early morning wake up call. I would inevitably have a restless night, worrying about whether I would wake up in time, but always doing so. On one occasion we were standing ready in our respective kitchens when the rain was so heavy we cried off, but otherwise we kept to our agreement right up to marathon week. Once we got out there the worst part – the thought of getting up and out so early – was over. We rose and ran at 6am, or earlier, twenty times.

After a month or two I enrolled on some pilates classes, to begin to work on balance and flexibility – I’m not at all disciplined about stretching (or warming up, or cooling down…). I didn’t stick to my plan as rigidly as when I trained for my first half marathon the year before, but in terms of consistency I have run on average three-four times each week for over six months. In a ‘normal’ month I tend to average around 100 miles anyway, which built up to 120 in February and March. I already have a mental list of things I would do differently next time, which I may well blog in future.

I ran a half marathon a month in August, September and October, as I wanted to keep my training as varied and interesting as possible. I enjoyed them all for different reasons, although taking part in Run The Castles in Northumberland was truly a pleasure – a stunning setting, beautiful autumnal sunshine and a time I didn’t expect – 1.57 which is my second fastest half. I also ran my first ten mile race, the Caistor Tough Ten, on a lovely sunny day around quiet and undulating North Lincolnshire country lanes and trails, as well as the Percy Pud 10k in Sheffield in early December.

In January to March I took part in four of the five club cross country races which never seem to get any easier.

Alongside a group from school I ran my first half of the year in March at Retford. As a team we raised over £1000 for Cancer Research. A couple of weeks afterwards some of us ran a fun Easter-themed 10k on Good Friday. 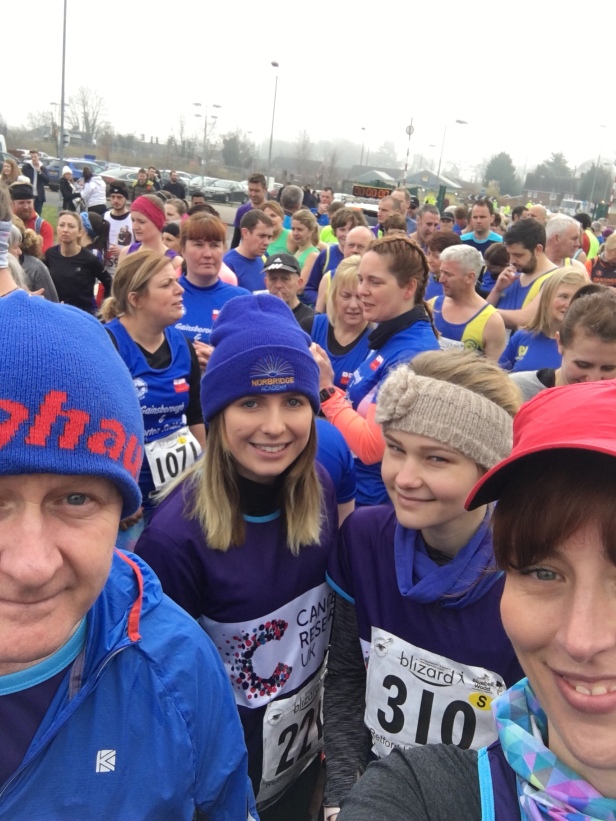 I also completed my first 20 mile race, which was postponed for a week due to the snow. My training partner and I still headed out on the original date, and ran up towards Clumber Park, looping around and out and back to make up the requisite distance. It was so cold first my laces froze, then my hair, neither defrosting before I got home. I fell flat on my face, as we were running on trails so a certain amount of guesswork was required regarding where your feet would make contact with the ground. It took a couple of days for my legs to recover from running in these conditions, but I was relieved to have still covered the planned distance.

The following Sunday I was surprised at how nervous I felt – I now knew I could run 20 miles – even in snow, at 9.40 pace, although as that run involved pausing for water, gels and photos it kind of felt like cheating. There would be no stopping my watch during a race. To make matters worse, the new date was the Sunday morning after the clocks changed, so getting up and on the road felt super early. Charlotte and I arrived and collected numbers, and it all felt low key and relaxed, even though almost everybody was wearing club vests. I ran with Charlotte even though a few weeks back we had realised and accepted that our paces were different, she was able to comfortably run much faster than me, and found 9 minute pace a breeze on even our longest runs. We were on 1 hour 29 minutes at the ten mile mark. The sun came out and it felt SO hot compared to recent weather – we’d paddled through snow and slush just seven days previously, and this by contrast was positively tropical.

Around mile 16 I could see Charlotte had a lot more left in the tank than I did, so I said she should keep going and I would see her shortly. The last two or three miles were really tough just due to being fatigued, in fact, at 18 miles I decided I would walk a bit but that actually seemed more difficult than running so I managed to pick up the pace again. I’m fairly sure that it was only running in with a couple of runners from Clowne that got me to the end in one piece. I was very pleased to have finished in three hours five minutes, so 9.17 pace. Medal in hand and a smile on my face I headed towards the water and extremely generous buffet to meet up with Charlotte and to force down some food and a can of Coke. Two weeks before the big day on 8th of April, this race was to become the benchmark for how to approach – and succeed – at Manchester.