On Halloween I blogged about looking for a pattern fit for a Christmas frock. Well, a couple of weeks ago I settled on one at last. It’s one of the first patterns I bought, (I still don’t have that many) and I chose it simply because it’s very me, a fairly feminine style with a flattering waistline. Initially I ignored it as the dresses on the pattern look too ordinary or daytime-y, but eventually I took a closer look at the different possible views. As I definitely didn’t want it to look formal or businesslike, I settled on View C, with the flared skirt and a belt but with the carriages for the belt.

I’d paid for 2.5 metres of my chosen fabric, but received almost 3 as it was the end of the roll. It was just enough, and laying and cutting out the pattern pieces was straightforward. I marked, basted and sewed the pleats and darts into the bodice, then stitched the six skirt sections together. I attached the skirt to the bodice with seams vaguely matching. At this point I didn’t have the required bias tape or zip, so I skipped those steps and hemmed the skirt. This called for a method I hadn’t used before, stitching around the hem and using this to mark where to turn up, then double hemming as normal. I was pleased with how the dress was coming together. It was the first time I had made a pattern this fitted and with a separate skirt and bodice. 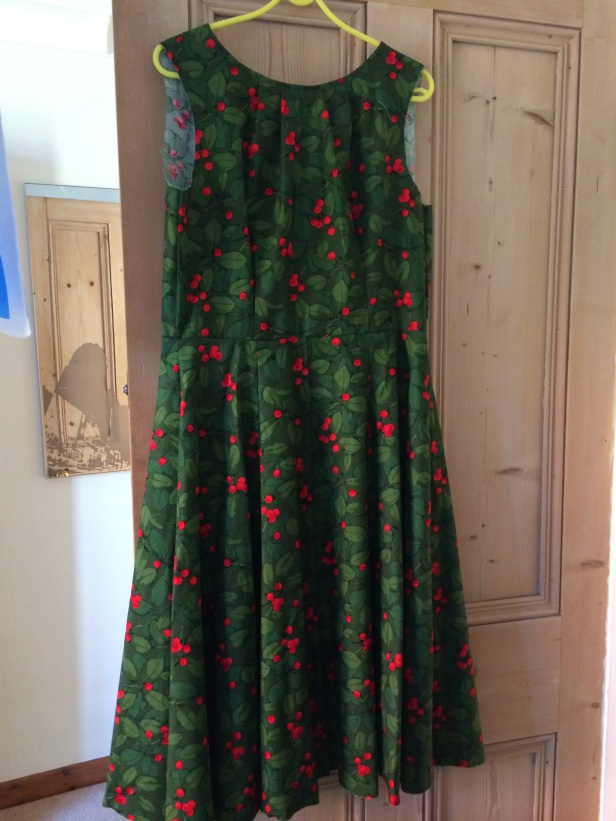 The dress stayed hanging on the door for over a week, as I waited for the tape and zip to arrive. When the tape did, the perils of online ordering were highlighted, as the green was much too bright. I had also ordered a concealed 22 inch zip, which arrived and was the perfect colour. However when I read the pattern again, it should not have been a concealed zip, plus all my subsequent research seemed to suggest that I needed a DIFFERENT zipper foot, and I had never even used my REGULAR zipper foot before. Frustrated at being so close to finishing the make, but with two fairly big problems, the dress returned to the back of the door for a few more days. During this time I located some olive green bias tape in a haberdashery shop in York.

I hadn’t used bias tape before, or if I had it was on a make where it just used a rectangle of the dress fabric that was stretched while sewn to create a neckline. No folds or stiffness to complicate things. More research left me feeling confused and unclear, until I had a mini epiphany and decided to think of the tape as a facing, and basically see what happened. 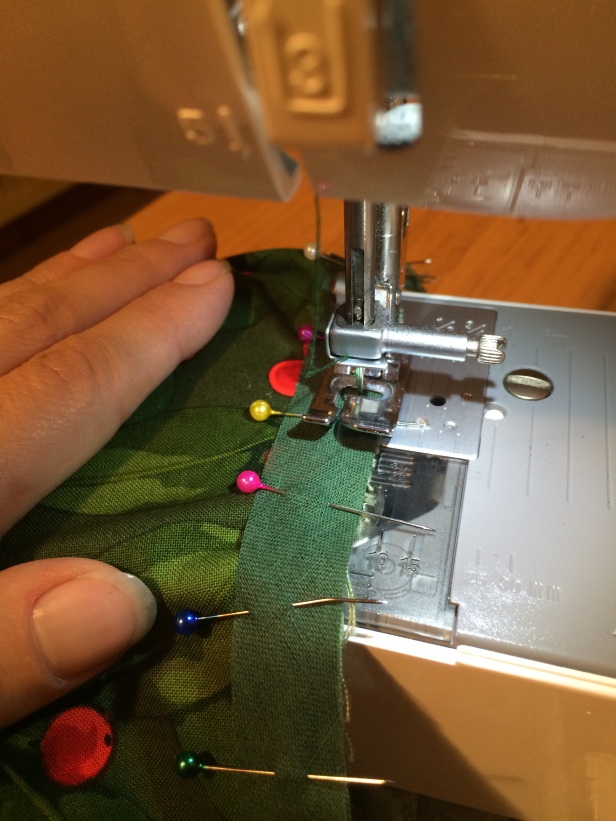 This turned out ok…ish, some of my stitching showed through to the front but I conceded that this would blend in with the top stitching. I had ordered two more (to try to get a decent colour match) zips, but with one night to go before I needed the dress, they hadn’t arrived so I looked back at the concealed zip and regular zipper foot, and went for it. The result was not concealed but fairly neat, and more importantly meant the dress was finally completed. 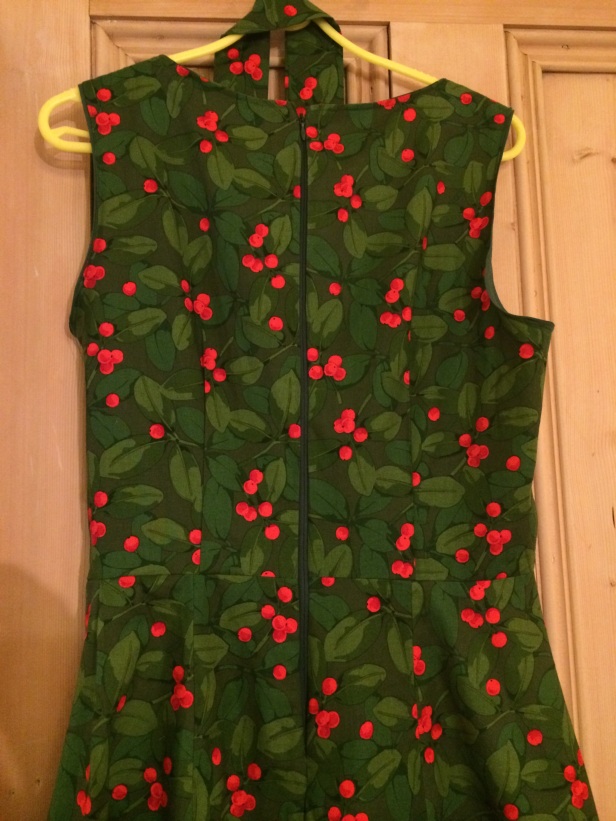 When the dress had been hemmed I thought I would have preferred it be shorter, above my knee, but I felt like I would lose the effect of the wide skirt if I started hacking away at that point. Next time I would try the shorter option, but I think the fabric and pattern give a vintage style together in this make. I wore it with some green kitten heels I bought for a Christmas party about ten years ago, and have worn it again with waxed brown knee boots to a daytime gathering, but the heels work better. 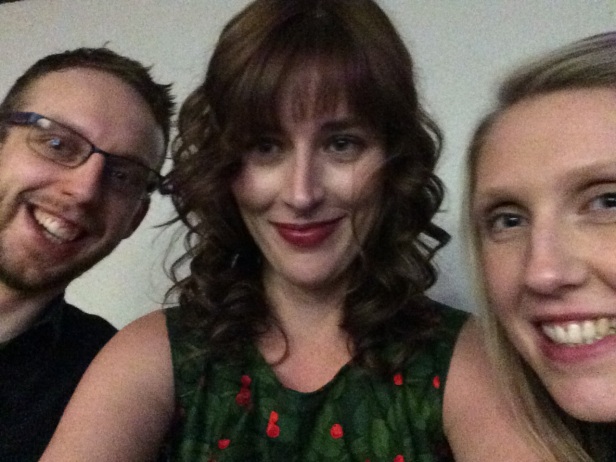 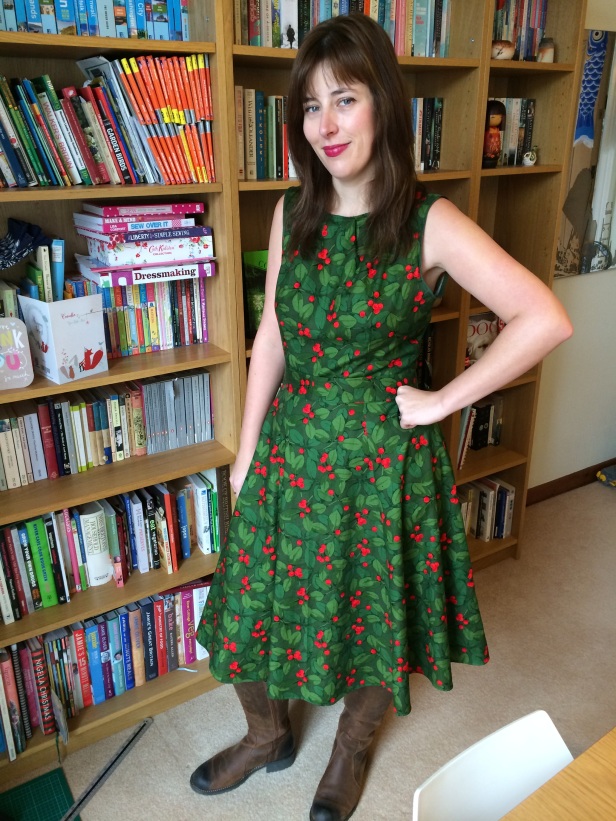 I like the dress because it’s a one off, it’s Christmassy but not naff (hopefully!) and I like the neckline and the bodice. Under the arms is a little wide and also there could be less fabric where the zip meets between my shoulders, so I would attempt to make alterations to these areas next time. I think it took 10-12 hours in total, and with modifications, I would make it again. My favourite feedback came from some girls in the toilets at my Christmas party. I was checking the overall effect in a full length mirror and two girls told me they loved my dress – unprompted! I told them I had made it and it was my first time wearing it. It was so lovely to get compliments from strangers, and the first time it has happened on something I have made.

5 thoughts on “The Holly and The Poinsettia” 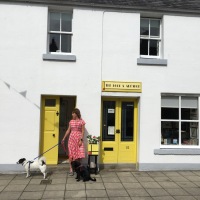 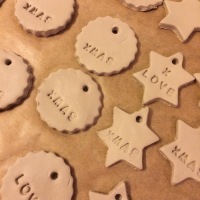