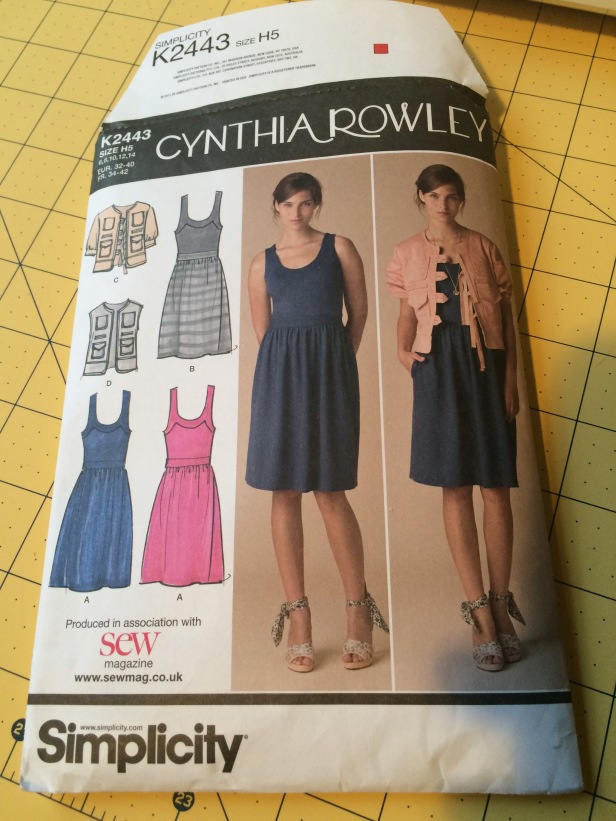 After the success of my checked shirt, I was keen to keep sewing and to continue to learn something, anything, that would enable me to continue to grow as a sewist. After flicking through my boxes of patterns, I settled on another Cynthia Rowley, as I haven’t been disappointed by any of her makes yet, and have had successes here, here and here. The 2443 looked like a lovely, casual dress, and was quite different from anything I’ve made before. I chose some fabric that I have had in my stash for a few months, that I had originally thought of as jersey, but on closer examination it was much too dense and heavy, although it was stretchy. I’m fairly sure it’s something like scuba, or neoprene, neither of which were recommended explicitly on the pattern sleeve, but I persevered nonetheless. 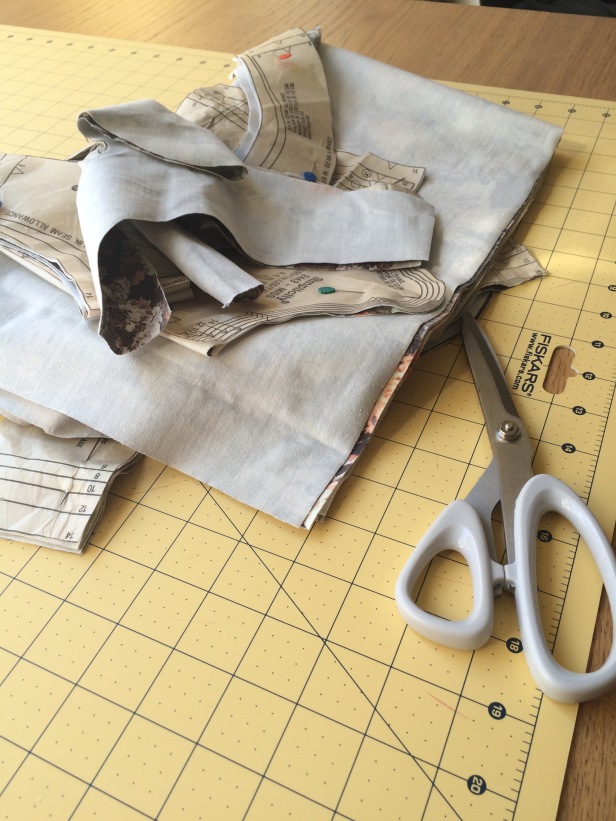 It was a dream to cut out with my rotary cutter, no fraying or tricky parts to navigate. There weren’t too many pattern pieces, and I opted to include the pockets, but to try without the zip – as a stretchy fabric I thought it was unlikely to be necessary, so ploughed ahead. The pockets turned out to be the biggest headache of the make! Although I have made them before, I somehow attached them wrong THREE TIMES before getting it right on the fourth – which was a pain. Have I mentioned I’m not one for unpicking? Apart from that, I sewed the wrong seam along the back neckline straps, but only did so once which paled in comparison with the pockets. 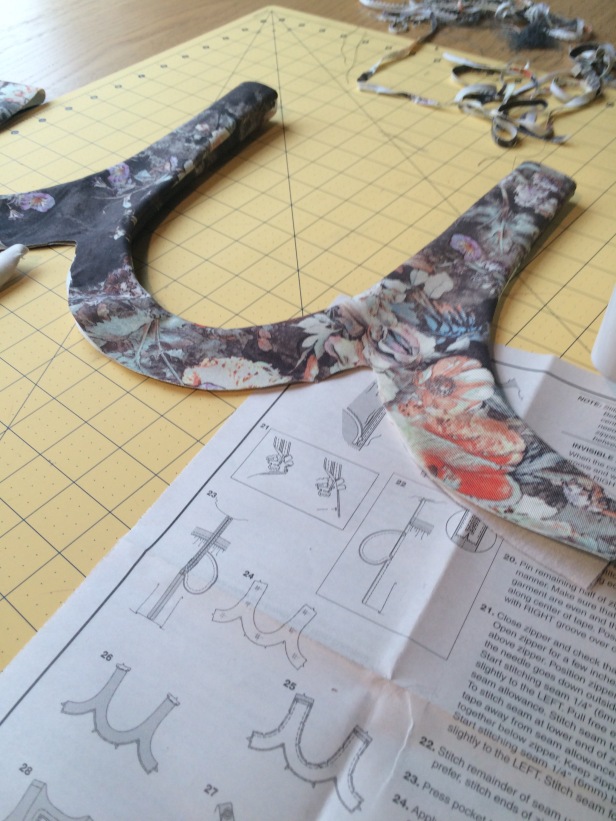 Towards the end of the make, which came together smoothly other than my silly mistakes, you have to pin the straps to the bodice. Placing the two pieces side by side I could see how they would fit together like a jigsaw, but in a similar way to princess seams found it really hard to work out how to place raw edges together to pin and then sew. I did so, but it was tricky and even with loads of pins, matching up all of the curves and corners felt like a losing battle at some points. 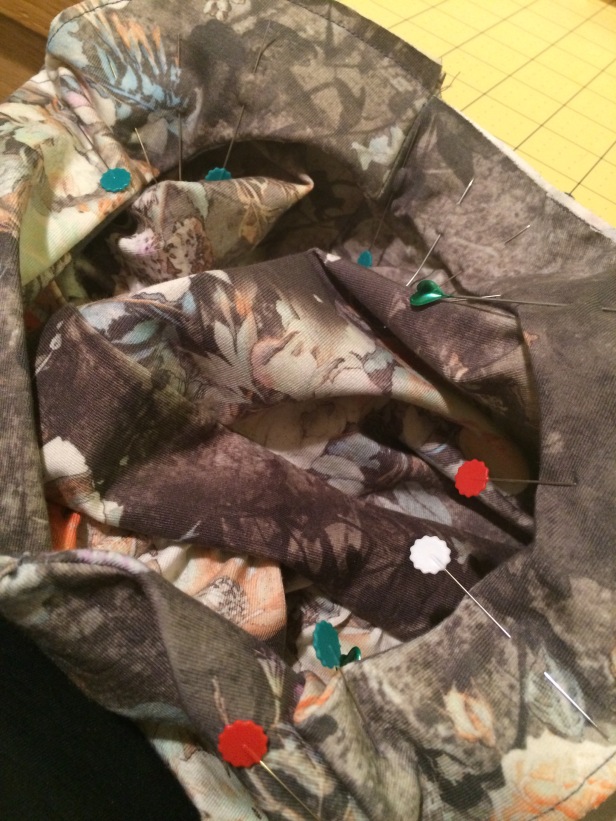 Doubtfully, and with little other option, I stitched where I had pinned, then unpinned, re-sewed one small section along the back where it hadn’t caught, and then folded the straps back to where they should be. Somehow, it had worked, and it didn’t look half bad. 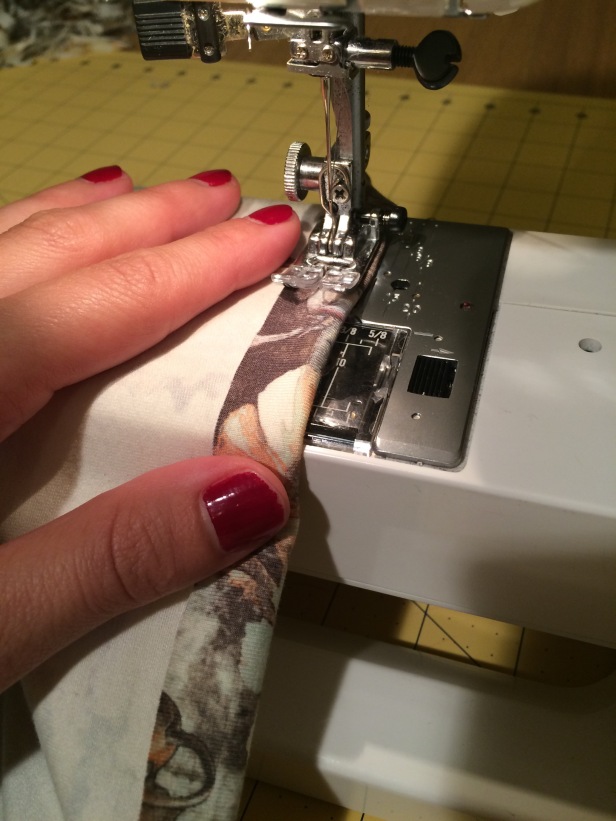 All that was left to do was hem. I hadn’t even attempted to press any of this make a long the way, it would have either melted the fabric or not worked whatsoever, so I used the width of the machine foot to sew my first hem, then folded it up again so it was a double hem. I was worried it might be too bulky but I think it turned out ok. I’m really pleased with the finished make! I love the fabric, and I think I have enough left for a skirt or some kind of top. The racer back means I need to give my underwear some consideration, but after a paperclip related tip from Nat I think my worry may be unfounded. I’m pleased with the drape of the fabric, even though it’s heavier than prescribed, and feel I could wear this dress to an occasion or just a day out, or possibly even work, with a cardigan. I would like to make another in some plain ponte di roma, but as I’m on a bit of a self-imposed fabric-buying-ban, I feel I should try and work my way through at least some of what’s in my stash first. I did find myself browsing Cynthia Rowley patterns on eBay earlier, though… 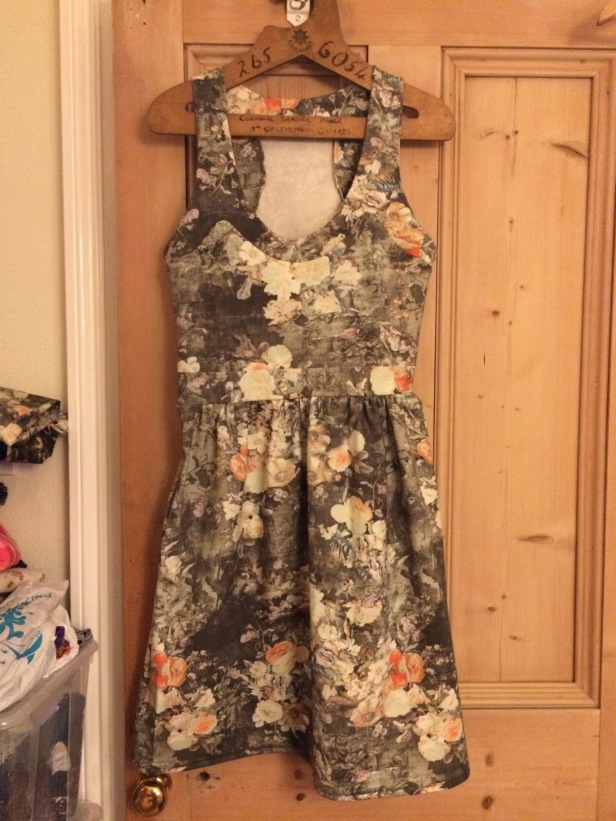 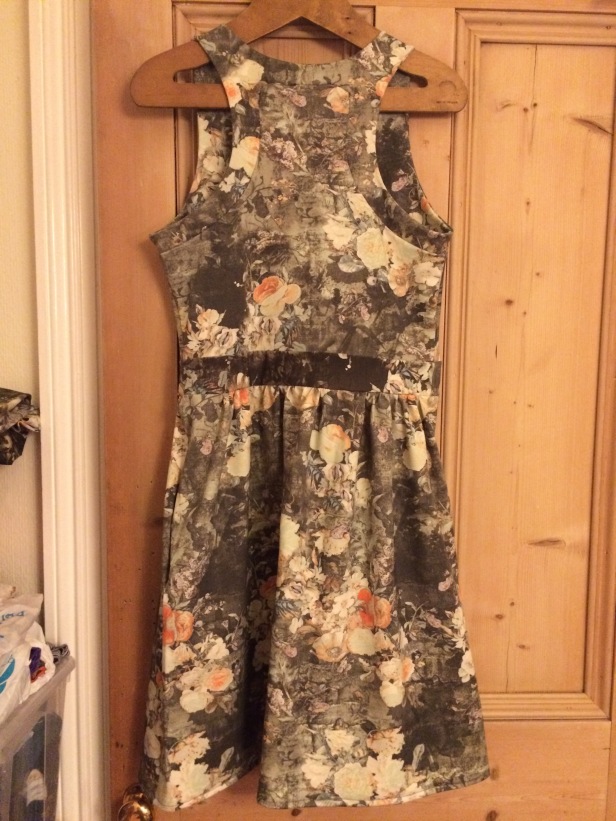 Over the Christmas holidays I managed to get a good few garments sewn up and I think this was my final make of the year: a @kitschycoo Lady Skater Dress made of some bright and beautiful scuba crepe kindly gifted by @minervadotcom Yesterday in the unseasonal yet very welcome winter sunshine I got photos, so those and my full write up will be coming to the Minerva blog very soon. Oh and I’m already planning my next version of this gorgeous pattern 🌹 • • • #ladyskaterdress #minerva #minervamaker #blogger #blog #sewingwithknits #ukteacherswhosew #handmade #memade #gifted #stretch
Saturday birthdays are few and far between, so to celebrate turning 38 today I crossed the Pennines and headed for @crosbyparkrun ~ a parkrun which I have followed on Twitter for quite some time because, just look at it 😍 Not only is it on the beach, but it has Anthony Gormley’s Another Place in the background. That all makes for a very special @parkrunuk in my book - and today the sun even shone. This one will take some beating. After parkrun I continued my birthday celebrations by doing some fabric shopping and singing along to @frankturner as I drove home. • • • #loveparkrun #birthday #happybirthday #crosby #anotherplace #anthonygormley #anthonygormleysculptures #liverpool #parkruntourism #sculptures #seaside
Here’s me back in sunnier times debuting my first ever Named Patterns Kielo wrap dress made of beautiful ditsy print ponte. You can read my thoughts and/or just enjoy remembering the late summer sunshine over on the Minerva blog now ~ link in profile 🔗 • • • #minerva #minervamaker #kielo #kielowrapdress #named #namedpatterns #blogger #sewingwithknits #summer #memade #handmade #ukteacherswhosew
I’ve said it before and I’ll say it again: HOW hard is it to get photos of sewing projects during the winter months?! Luckily though, the short January days didn’t dampen my excitement about my latest make for @minervadotcom ~ this Southbank Dress in beautiful blush and grey leopard print jersey. I wore it yesterday and it’s the perfect outfit for this time of year because it can easily be layered, (I’m wearing a long sleeved thermal top underneath 😝) is super comfortable and looks great! I added a couple of inches to the length and am really happy with the fit. This time I used some scraps of contrasting cotton for the pockets, which, if you swipe, you’ll see I’m quite pleased about 🤩 There will be lots more photos and a full post coming to the @minervadotcom blog soon. In the meantime, you’ll mostly finding me wearing this 🐆 • • • #gifted #minervamaker #blogger #blog #southbankdress #southbank #ninalee #ninaleesouthbank #leopard #jersey #knits #stretch #blush #memade #handmade #handmadewardrobe #winterwardrobe #jumperdress #pinkcoatclub #ithaspockets
For my Sunday walk I snuggled up in my first make of the year: this Helen’s Closet Blackwood Cardigan made using some gorgeous vibrant fabric gifted to me by @minervadotcom It was perfect for keeping me toasty on a breezy morning in January. More pictures and a full blog post will be coming to you via Minerva very soon 💜 • • • #blackwood #blackwoodcardigan #helensclosetpatterns #helensclosetblackwood #minervamaker #blogger #newyear #ukteacherswhosew #memade #handmade #wool
One of the highlights of 2019 for me was becoming a blogger for @minervadotcom and @loubodufabrics so I’m thrilled to be welcoming in the new year with the publication of my blog post about my Mayfair dress. I’ve worn it a lot again lately and have loved doing so. You can read all about it over on the Minerva blog, the link is in my profile 🔗 • • • #mayfair #mayfairdress #ladymcelroy #MinervaMaker #blogger #memade #handmade #ukteacherswhosew #happynewyear #metallic #vintage #sewingwithknits #happynewyear #newyearsday #nyd #january 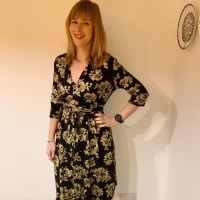 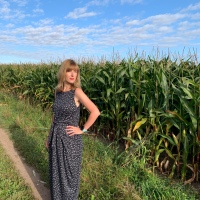